Robin Weigert ‘Kills It’ in the Indie Film Concussion

Murder and mayhem may be all in a days work for Robin Weigert on Sons of Anarchy, where she plays Ally Lowen, the brotherhood’s smart and savvy lawyer. Yet in Concussion a new must see indie film written and directed by Stacie Passon, she is absolutely stunning, delivering a killer performance that’s gritty, raw, and sexy — and so damn beautiful that you may just fall a little bit in love with her. 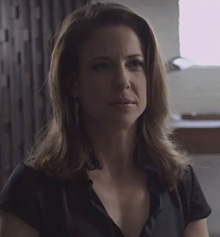 Weigert takes you deep into the deliciously complicated, and yes as the movie goes on, increasingly sex-filled world of Abby, a 40-something stay at home lesbian mom who is having a midlife crisis, leading up to her becoming a high end lesbian escort. As you may suspect, it all starts with a “concussion”, although frankly it could have been any event, that sparked Abby’s realization that something is missing from her life and her marriage. While she loves her wife and her kids, Abby is hungry — hungry for sex and freedom.

Once her desires are awakened there is no going back, so she hires a seriously sexy escort. It’s a scene you have to see for yourself because it starts out as awkward as a first date, and becomes an erotic and emotional turning point for her and us. One that sets Abby free, and is a bit like watching a starving woman eat for the first time in a very long while. She may have been in sexual lock down, but Abby is very good in bed, and through a series of twists and turns she starts taking on a steady stream of clients, and we’re in for one hell of an emotionally and sexually charged ride.

Abby lives a double life, one full of women, secrets and contradictions, all the while keeping up her marriage, because in many ways this film is as much about marriage as it is about her quest to find herself. “I love playing characters who are becoming someone else” says Weigert, and this is very much the case with Abby, who is as complicated as they come.