‘Sons of Anarchy’s’ Robin Weigert: ‘Anything is on the Table’ 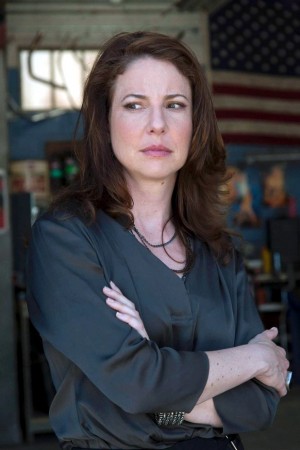 Desperate times call for desperate measures. In the case of Tara Knowles-Teller, those include framing your mother-in-law for the death of your unborn child. You know, just another day in Charming, California.

Now in its sixth season, Sons of Anarchy has never shied away from extreme violence and remarkable acts of betrayal. Those ingredients are in heavy supply this season, as Tara, a surgeon by trade and an outlaw by marriage, plots to move her children away from the increasingly dangerous dealings of their father Jax Teller, president of the Sons of Anarchy Motorcycle Club: Redwood Original. After five seasons of hostage situations, assassination attempts and abductions, Tara has finally had enough: She will stop her two sons (one her biological offspring, the other her child by law) from growing up in Jax’s violent shadow, no matter the personal cost.

Tara’s plan requires plenty of moving parts, including the participation of heroin addict Wendy, the biological mother of Jax’s first son; hospital administrator Margaret Murphy, one of Tara’s closest confidants; and Ally Lowen, legal counsel to SAMCRO, now advising Tara in her attempt to get the kids out of Charming.

“Being a lawyer for a member of a house divided is a lot more dynamic than being a lawyer for a member of a house united, and this whole season has been about the fracturing of that family,” Robin Weigert, who plays Lowen, said during a recent conference call with reporters. “Early on, I had to take a side. It was said in no uncertain terms in that scene with Gemma [Jax’s mother and Tara’s mother-in-law, played by Katey Sagal] whose side I was going to take. I think the line was, ‘I guess I’ll have to figure out which innocent is in need of a good defense,’ with the word ‘innocent’ loaded with irony.”…