They haven’t been nominated for any major awards, but that’s voters’ faults for not recognizing Robin Weigert and Maggie Siff. They gave two of last year’s best performances in “Concussion,” a sprightly, sneaky indie you can stream it right here! 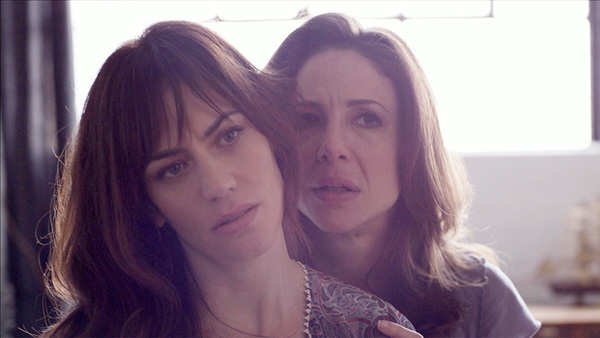 A decade ago Chris Rock defended gay marriage, saying homosexuals “have the right to be as miserable as everybody else.” That’s what’s happened to “Concussion”’s 40-something hero Abby (Weigert, “Deadwood”), who’s in a stilted, sexless suburban gay marriage, with kids. An accidental baseball to the head becomes the catalyst that gets Abby to make a curious decision: By day she retires to the Manhattan apartment she’s rehabbing and offers her services as a high-end prostitute.
Homosexuality is treated casually (when Abby refers to “my wife,” no one bats an eye), but that’s part of the sly commentary; as a lesbian, she’s still treated as a mysterious outsider, as when a bi-curious neighbor (Siff, “Sons of Anarchy”) becomes a client. It’s Luis Bunuel’s surrealist “Belle de Jour,” in which wife Catherine Deneuve takes a job at the local brothel, in a realistic bent — but not too realistic. First-time director Stacie Passon establishes a quasi-comic tone that’s at once assured and uneasy, while Weigert is thrillingly anxious, coming into her own only when tending to clients.
Please continue reading at: www.metro.us