Weigert makes what could have been an unconvincing character shift effortlessly but authentically between moods and motivations. 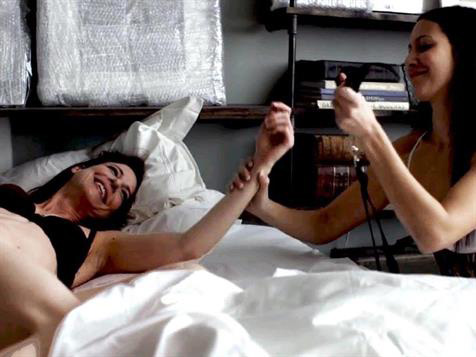 Concussion introduces its protagonist, Abby Ableman (Robin Weigert, The Sessions), with a blow to the head, a sudden knock that oozes blood and sparks an emotional outburst. The titular condition follows, but the haze it creates is more than a medical malady. Abby’s vague but insistent dissatisfaction, her unhappiness with her domestic lifestyle as a wife to lawyer Kate (Julie Fain Lawrence, TV’s Electric City) and a mother to Mayer (Maren Shapero) and Jake (Micah Shapero), bubbles to the surface.

Making her film debut after directing and producing commercials, writer/helmer Stacie Passon explores the extent of Abby’s restlessness, and the lengths she goes to in the service of rediscovering her inner passion. Abby’s quest appears explicitly sexual, as she turns an apartment renovation – a sanctioned release from suburban motherhood – into her haven for intimate affairs, as guided by her contractor-cum-procurer Justin (Johnathan Tchaikovsky, The Wolf of Wall Street). Her secretive second life as a women-for-women escort also offers a meditation on connection, alienation and contentment.

Though with a satirical edge, there is a very standard ‘well-to-do housewife wants something more’ story at play in Concussion, as the lead character seeks difference in adultery and experimentation – yet the film itself follows the same path. Passon takes an average narrative archetype, as complicated by the similarly familiar world of sex for profit, and heightens its interest in dwelling on the feeling of its moniker; not just the listlessness, tedium and boredom of living the same routine day after day, but the shock, anticipation and confusion of being thrust from the ordinary by force.

The director’s visual choices are calculated to convey the film’s muddled mindset, deliberate with observational points of focus on affluent details and aching minutiae, yet flurried in sweeping transitions from vignette to vignette. Grey is the overarching temperament and colour, the stated preference of Abby in her interior designing, but also pointedly her solace and shelter. Though she specifically searches for colour and meaning, the comfort of the non-descript continues to call. When one of her clients – the one with a link to her real existence, a cute mother (Maggie Siff, Leaves of Grass) from her gym and childrens’ school – expresses her dislike for the large, drab tiling of the apartment’s kitchen, Abby hurriedly smashes it away, only to replace it with a smaller but comparable ceramic coverings.

Anchored in their tentative trysts, the dynamic between Weigert and Siff, both seen together in television’s radically dissimilar Sons of Anarchy, best perfects the unease that characterises the feature’s cultivation of catharsis; there can be no easy solution, only awkwardness and insecurity. Their work together also essays Concussion’s finest component: its star. A veteran of many a television series, her unforgettable work in Deadwood among them, Weigert is finally gifted with a lead role that projects the extent of her talents on to a bigger canvass.

Abby is a difficult protagonist and a difficult role, one torn in competing directions and never confident of her decisions outside of the bedroom. Weigert makes what could have been a flighty, unconvincing character breathe with honesty, shifting effortlessly but authentically between moods and motivations. She also ensures that a journey of discovery that can have no happy ending retains interest, even in its predictable – albeit with purpose – moments. In Concussion, the surprise and sting stems from Weigert’s performance, as it does from the film around her; the ambiguity echoes in an intricate portrayal of uncertainty, and its inescapable impact.